Four out of five of the  GB Team out front of the workshop.

Living on a farm in New Berlin, Pennsylvania this summer building the manufacturing facility for our startup, Gilson Boards, the founding team discussed purchasing livestock on a few occasions.  I was the strongest proponent of acquiring an animal, a pig my general organism of fancy.  We would go to the auction once every two weeks to eat fish sandwiches and homemade fries, drink Mountain Dew, and search for a 100 lb. pig.  We even went as far as signing up and getting a bid card one week.  We never got a pig that summer.

A summer of firsts, we realized quite early on that to own a pig you must either take care of it, or kill and eat it.  Having never fired a gun in my life before living in that cabin in the woods, I had never killed anything larger than the mice we caught that semester in the fraternity house.  Despite my enthusiasm for owning livestock, and butchering an animal, the mental preparation required to complete the endeavor proved too formidable.  I left the farm having killed only the abominable snow-bear that attacked our cabin in a nightmare, and an electric drill.

Islam is the prevailing religion in Indonesia – the call to prayer ushers itself into any room.  Aspects of Indonesian culture have adopted aspects of religious doctrine.   Last week, we celebrated Idul Adha; the holiday pays homage to when Ibrahim (Abraham) sacrificed a lamb instead of his first-born son, as told in the Old Testament.  Indonesian Muslims celebrate through ceremony with a component of butchering livestock and distributing meat to those in need.

One of the four bulls we butchered that day.

I helped to participate in the butchering portion of the celebration as well.  They offered me the chance to make the decisive leathery cut, but I couldn’t bring myself to do it.  I stood, watching through the screen of my iPhone – the pretense of filming created enough separation from the act to briefly bulwark the rising queasiness.  After the coughing and bleeding ended, the process began to incorporate more members.  As they were removed, large chunks were brought to another station set up to divide the pieces into roughly 1 lb. sections to be bagged and delivered to families.

Trimming the meat to appropriate sizes for distribution to the poor. This was the most difficult part – the meat was still hot.

This second to last stage of trimming the pieces to their final size is where I began to fully participate.   I was incredibly thankful to be offered the opportunity; it was truly a community event.  Everyone was smiling, talking, and sharing, as they worked together on a philanthropic activity.  They weren’t exclusive in any way, giving me full rights to participate even though I am not Muslim, even offering me the honor of making the initial cut.  In fact, it seemed to bring them immense joy that I was there, interested, and participating.

I think this type of event more clearly shows what a collectivist culture values and appreciates.  While I am far from an expert in understanding collectivism, events like this show me how different it is from what I read in the social psychology textbooks in college.  People are so greatly appreciated here simply for existing.  I did not need to be a Muslim scholar, the headmaster of the school, a professional butcher, or anyone to be offered the honor of making the incision.  I simply had to be me. 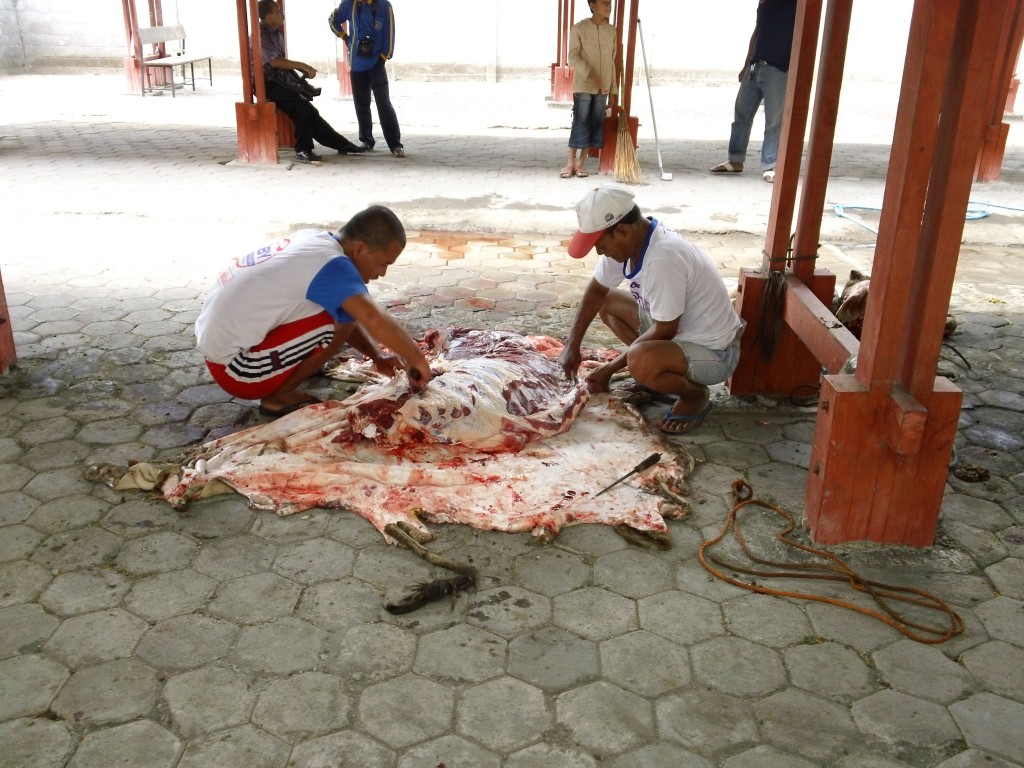 Of course, this example must be tempered with the notion that to an extent I am a VIP here, because of my differences.   I haven’t learned enough yet about the culture to fully understand how that influence affects my experience compared to a native Indonesian’s, and don’t think I will until my language skills develop until the point where I can realistically have a native Indonesian friend outside of my school.

The most difficult part of the experience was not the smell, or the blood, or the actual moment where life ceased to exist.  It was sitting in the section away from the actual event where we sat trimming the meat.  The meat was still hot – physically hot.  The human body runs at 98.6 degrees Fahrenheit; I don’t know what the average bull’s body temperature runs, but it was hot to the touch.

This moment was most disturbing because up until that point the pieces fit clearly with heuristic structure.  Even though I had never seen a bull killed before, it went how one might expect it to.   When the large chunks were removed, the ribs, the hindquarter, etc., it looked just like a butcher shop in the states.   I was asked, “At what point does the cow go from animal, to meat?”  It wasn’t the moment the animal was certainly dead.  At that point it was still a cow, although a no longer living one.  For me, it was when the larger chunks were removed from the leathery skin, and the rest of the body parts. 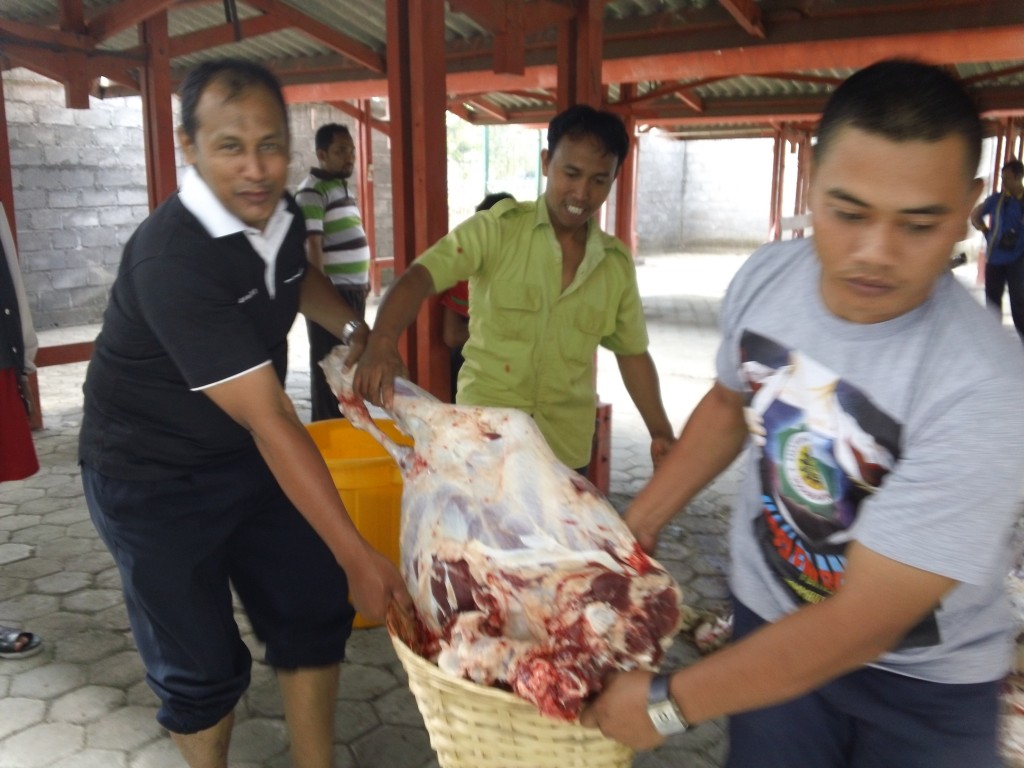 Groups of men would carry the large chunks once separated from the animal to the place where they would be trimmed.

My heuristic of meat is moist, red-pink, maybe a bit slimy, and cold.  In the United States I had never had the experience of touching meat that was hot unless it had already been cooked and evolved into steak.  In my mind what I was holding was no longer an animal it was meat.  I expected it to be cold, or at most room-temperature, but not hot.  My brain had a difficult time realizing that this is normally how the transition goes, and that my upbringing had caused me to be far removed from the reality of the situation – When you butcher a cow, the meat is still hot from the body-heat of the animal for a while.

Since then, I have eaten beef.  I have had some trouble with it, and choose not to eat very much.  Aside from the communal participation and excitement of being involved, this brought to mind many of the arguments supporting the locavore movement.  While I think in some ways the locavore movement is a good marketing ploy, and profit hinders its claimed purpose, I realized through this experience how far removed from my food I am back home.

What is the point at which an animal becomes meat?  Would you butcher your own animals for food?  Why don’t you?  What does that say about you? Have you read the Holy Qu’ran?  The Torah?  The Bible?