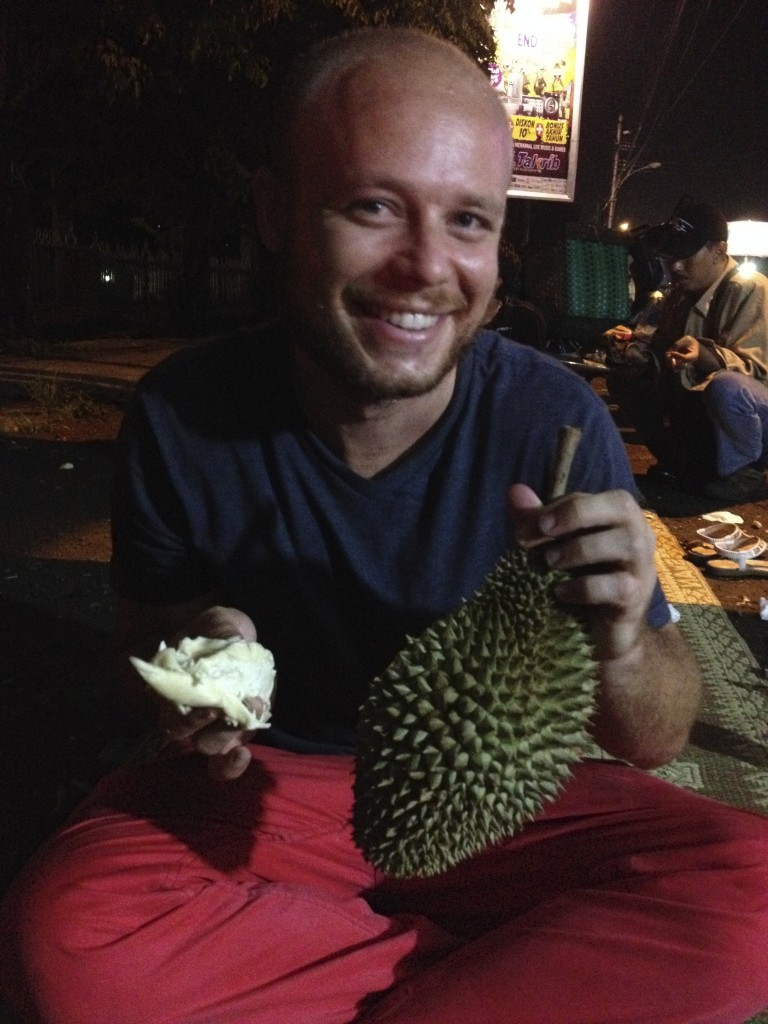 Posing with a durian.

King of Fruits, the true test of a fruitphile, a delicacy, Durian is an assault on the claim of all other fruits to their categorization, and it only grows in Southeast Asia.

The fruit is most notable for its pungent smell that has been compared to rotting flesh, and heaven. The odor is so abrasive it is banned from confined public spaces like airplanes and hotels. Traveling through Lombok with my German friends, I had to bribe the hotel reception staff to let us bring in our feast.

They’re not easy to hide. A durian fruit is roughly the size of a human head and covered in spikes that actually pierce the skin. They are opened in segments with seeds growing in the compartments between. The fruity flesh surrounds seeds similar to a mango and can have a similar texture: creamy or hard depending on how long you can wait to eat it. I tend to prefer them a little ripe so the texture is soft, but not too much otherwise they become durian manis (sweet durian) and I prefer the flavor when it’s still pahit (bitter).

At first they don’t look particularly appetizing. The fruit covered seeds somewhat resemble large maggots resting peacefully in the bowels of this spike ball. The taste can be overwhelming. Most people can barely finish one seed their first time and a single durian usually has 3-5 compartments shielding 2-4 seeds each. At first you are hit with an extreme bitter and I think oniony taste. The after-taste lingers and your hands are rewarded with a hint of durian for an hour or two.

Why would anyone eat this fruit?

I love it. Most people in Indonesia love it, but only eat it rarely because it tends to be expensive. In a place where an average dinner costs $0.70 paying $5.00 for a fruit seems a bit ludicrous. But we can’t help it.

Many Westerners will say they came, they tried, they hated. It’s just not for them. They don’t have the gene that makes one enjoy durian. I figured I would be the same after my first experience, and then I discovered something interesting. The second time I ate durian it wasn’t vomit-inducing. The third time it was lumayan (not bad, kind of good). The fourth time I tried it enak sekali (very delicious). The fruit is an acquired taste. If you stick with it you learn to love it. Magically you no longer sense the grossness of the smell, but rather the blossoming lurking behind it. You no longer taste the bitterness but the beautiful complexity of sweetness and nuttiness. 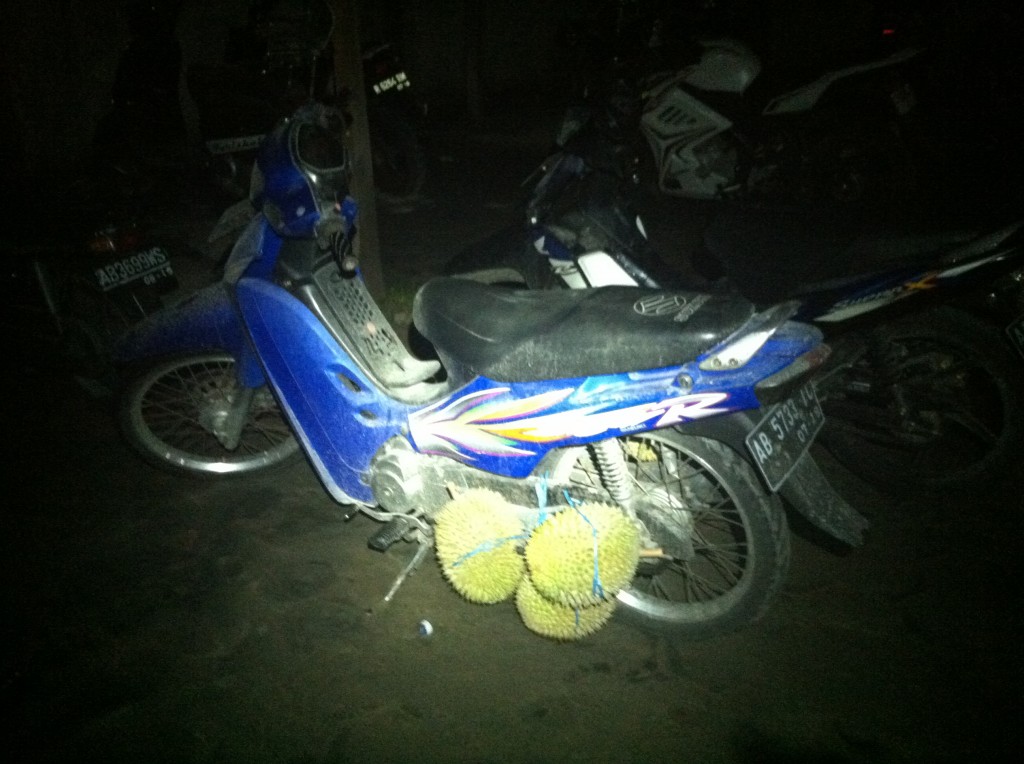 Taking home a few durian on my motorcycle.

It is currently durian season here in Indonesia, which means the prices have come down and trucks packed with them line the sides of the roads. Usually we buy and eat them right there on the side of the road. Sometimes my Ibu brings them home and makes a chilled durian juice to be enjoyed as an after supper desert. I’m still trying to figure out if it’s possible to steal away a few seeds to plant when I get home.