If I ever fall off the face of the Earth and you really need to get hold of me, I’ll be basking in a bungalow on Gili Air. Dig through the archives to find this post, and come search for me. The only flaw in your plan will be you mysteriously forget why it was so imperative to find me and will instead join me. You’ll get stuck, just like I did.

During another round of ujian (exams) for kelas tiga (class three – 12th grade) my 10th and 11th grade students, enjoyed a nice long holiday. I decided to venture to Lombok, a next door island that everyone says is the next Bali. Gwenyth Paltrow lives there!

I chose to travel by myself after a conversation with the Cultural Attaché from the US Embassy who recommended I use my familiarity with a foreign country as an opportunity to practice traveling alone. I left without a plan, without friends, without accommodation, and without a return ticket. Initially I planned to chase surf. I chose to come to Indonesia because as a 10-year old grom I dreamed of the waves here. After almost 8 months in Indonesia I’ve surfed a grand total of 4 times. I quickly learned that even the mildest planning gang aft agley when traveling alone.

At the Lombok airport I met two German brothers on their own adventure looking to share a cab. There are two towns in Lombok that travellers gravitate towards: Kuta, the surf town (my destination), and Senggigi, the villa, food and drink, town. They were going to Senggigi before heading to the Gili islands and invited me along. Why not?

Gili Trawangan is known as the party island, Gili Air the couples island, Gili Meno the quiet of the trio. I heard there was some surf on Gili T and figured I’d go catch a few waves there and would surf Kuta, Lombok, at the end of my trip instead.

The next morning we set off for Gili T. The drive to the harbor from Senggigi is the most beautiful drive in the world. It took 45 minutes and I wished for a few more on the back of that motorcycle. Lush green forests, curving mountain roads revealing a peek at hidden harbors of National Geographic blue water stirred the nervous anticipation and appreciation of a low-cut blouse. I couldn’t even take a photograph. I knew that a picture could only obfuscate the image and I preferred to keep the original.

Gili T was training for my love affair with island paradise. I spent a day sitting in a bungalow on the beach reading, sleeping, swimming, eating, chatting, and admiring the beauty of the universe. I’m not sure I’ve ever been happier. Dawdling on the beach searching for pieces of blue coral I met a fellow American who lived on Gili Air for 6 weeks during her year of traveling. She planned to return the following day because it’s “way better.” Once again, I was invited along and I went. It’s hard to actually be alone when you’re supposed to be traveling alone.

She was right. Gili Air is way better. It has all the perks of Gili T, but instead of feeling like the last day of a music festival where everyone walks around drunk and tired Air is a fresh breath. I followed a local into the center of the island and found myself a private bungalow with wifi, breakfast, and aircon for $12 a night. 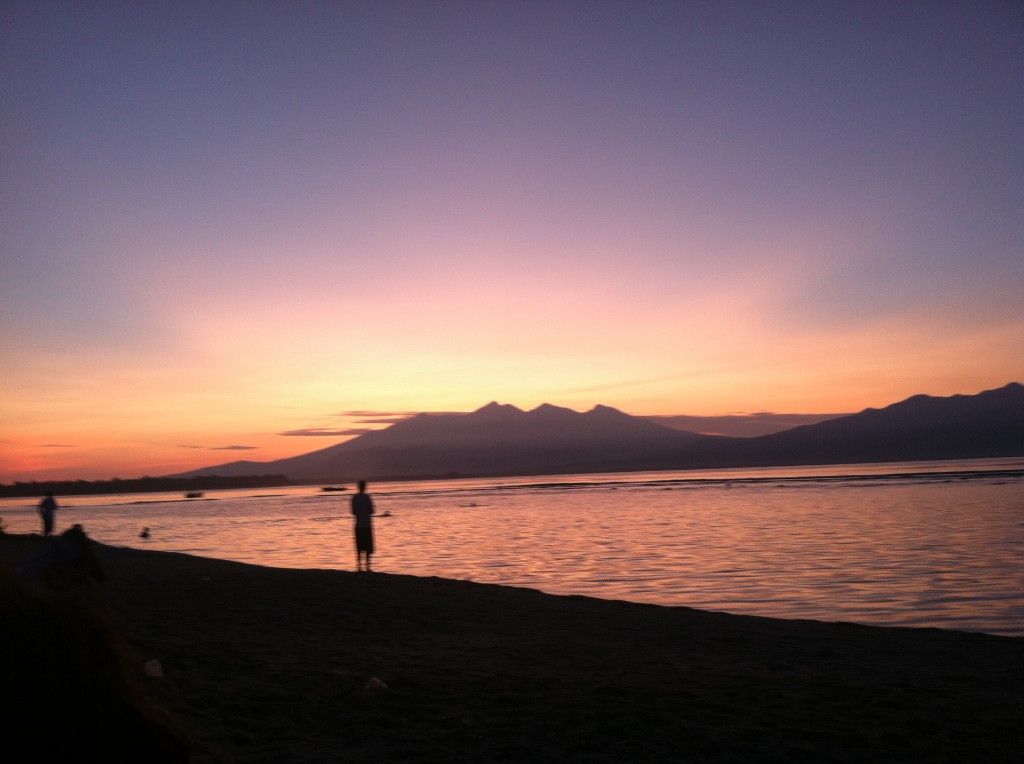 Each day, I did exactly what I wanted to do, and it was always the same. I would wake up and enjoy my breakfast on the porch of my bungalow and read for a couple hours. Then I would go to the beach and swim and have a fresh juice. I’d set up my hammock and read or meditate until lunch. Then I would meet up with my new friends and we would play cards and chat and laugh and swim and snorkel and play music together until everyone quieted down as the sun began its daily performance. We ate fresh fish caught off the ocean that day by local fisherman for dinner and slowly made our ways home to prepare to do the same again tomorrow.

It was heaven. It was bliss. It was carefree. It was island paradise. It was Neverland. It was sandy. It was sleepy. It was edifying. It was everything.

In the back of my mind I knew I needed to go home and that I really should catch a few surf sessions before I return. It didn’t really matter too much when this happened; I just need to plan it. I gave myself one goal, to buy a plane ticket home. If I bought my plane ticket home I could backwards plan two days in Kuta for surfing and when I would have to leave Air. Shouldn’t be too hard, right? After TFA to-do lists that competed for shelf-space with novels one measly item is nothing.

I couldn’t do it. I didn’t want to leave. Why would I? I had the island fever. I loved waking up every day completely present and engaged in living. I knew that as soon as I booked that ticket I would already be taking one step off of the island. I would no longer be a part of its joyful freedom by making a plan outside of our sanctuary. In a relationship once you make the decision to cheat you can’t really love with the same affection – the closeness is gone – until you re-devote your entire being. Buying that ticket would be cheating on the island. It was renouncing everything she shared with me, everything she stood for and I knew she wouldn’t continue to share her majesty with me in the same way. It took me three days to book that ticket.